What Time Magazine & Business Times
had to say about Utility Monitoring 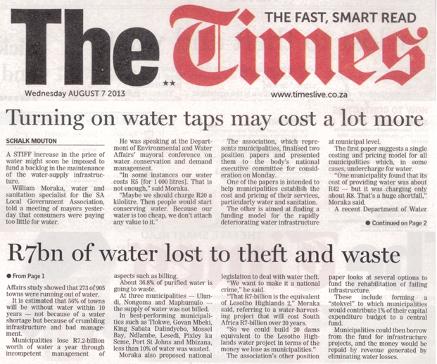 It all started with a stuck water meter.... at my teenagers' high school. I was serving on the School Governing Body (SGB) when I was alerted to erratic water bills and took a stroll up to take a look at the City of Johannesburg's (CoJ) water meters (the school has two supplies). One meter was spinning so fast it could virtually be used as a fan whilst the other was stuck fast, not even responding to gentle "tapping" to see if it would magically spring to life.

We fired off letters to Coj and Johannesburg Water, alerting them to the faulty meter, and waited for the next (hopefully corrected) account to arrive. Sadly, the next account was again based on estimated usage, as were many many more to follow as the faulty meter remained in place.

Fortunately, in anticipation of a protracted process to get the faulty meter swapped, the SGB installed its own new meters in series with (and after) CoJ's to ensure that we at least understood and could keep track of our actual usage and could budget accordingly. The nett result was that we now had four water meters, two belonging to the Council (one working and one not) and two of our own (we also installed a meter to measure usage of an ablution block, but that fits into another story about the school's "green" initiatives)
Instead of simply waiting for the monthly account to arrive and then verifying our readings against their estimates, we initiated a regular manual meter reading process. Each work-day morning, one of the ground staff would record the readings on all four meters. These fairly regular readings were captured into a spreadsheet and so we started creating a detailed graph of our usage (see graph 1)

Our new methodology immediately yielded interesting data (and savings). We now suddenly had an early-warning system for over-usage caused by leaking and running taps. You can imagine in a school of over 1,000 people how many shower and basin taps are inadvertently left on and how many toilets can be continually running overnight. Now however, we would come into school on a Monday morning, enter the day's readings and see how much water had been used over the weekend when the school was mostly empty (barring sporting weekends and allowing for staff living on the premises) Almost immediately we picked-up a few anomalies in some areas and initiated some changes to prevent further wastage. We simultaneously undertook a top-to-bottom servicing of all toilets and taps.

When the school holidays started, the gap in our data harvesting was immediately identified as a problem, and the next phase of our journey began - remote metering. I met with various companies and explored options, and eventually settled on a suitable product that enabled us to connect our meters to the Internet and keep a far closer eye on them, even when staff were on holiday. In addition, the meters can be set to read at various intervals, so instead of only one reading every 30 days, we were now able to get around 10,000 readings a year. More than enough data to start identifying over-night leaks and seeing daily, weekly and season usage patterns which could be compared with Annual and Seasonal rainfall patterns (below).

Massive Savings (and refunds too)

Though our story started with a fault, and had literally years of writing, complaining, reporting and being generally ignored in the middle, it does have a happy ending. Simply being able to take regular usage readings from my laptop (even while on holiday) helped us identify and resolve a few leaks (one fairly large one as it turns out), as well as being able to easily see when borehole irrigation wasn't being used effectively and take remedial action.

The really wonderful news though, was that through the persistent interventions of our local Councillor, and some nifty facilitation by another of our SGB members, we were eventually visited by a lovely and incredible efficient woman from Johannesburg Water who met with us and brought our woes to an end. I am please to report that, our abundance of data, readings, graphs and detailed analysis, resulted in a complete reversal of all provisional estimates and new (corrected) accounts being generated and the school receiving an incredible credit to our account of close to half a million rand.

While doing my research, I also identified perfect products and solutions to verify our electricity usage. It seemed, given the present experience with not getting a simple water meter replaced, that we were exposed to a similar, and potentially more expensive risk, if the same happened to one (or worse, all three) of our electricity meters. Once again, instead of a mere 12 electricity readings a year, we were now collecting closer to 20,000 electricity readings.

Having recently overseen the installation and commissioning of an 18kWh array, I can report that it works beautifully.
PV is exactly the opposite of a leaking tap.... i.e. as long as there's sunlight, the panels are making electricity and reducing your bills. Depending on your usage patterns and your (rapidly climbing) electricity tariff, PV is already an attractive financial investment. 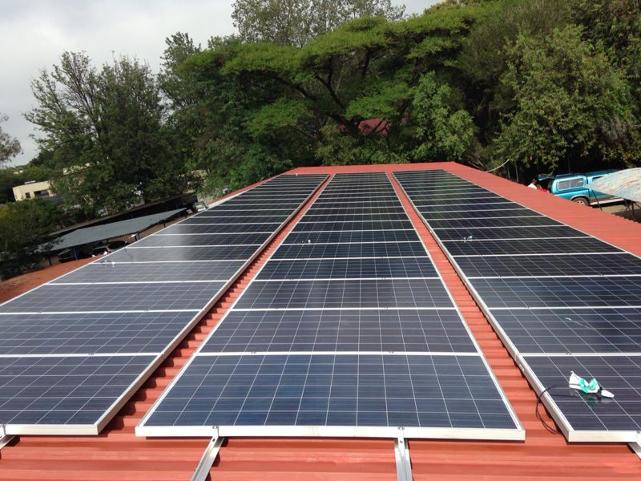 How can we help you?

Through my involvement in my youngest child's Primary school, we have also now installed water monitoring equipment at another local school and similarly reaping meaningful data and benefits.

If you're experiencing similar horror stories, or simply want more information to enable you to monitor and manage your utilities, drop me an eMail and I'll come visit you and work on a suitable and cost-saving solution with you.